He was named after Del and Raquel could not decide on a name for their unborn baby (Raquel thought of Aron, pronounced airon, but Uncle Albert thought the kids would nickname him Aron a G-string and Del thought Troy, but the name Troy Trotter was instantly dismissed), so Rodney sarcastically suggested that they name him Damien as Rodney was convinced that the baby would be born half-demon. To his horror they adored the name and Rodney desperately tried to get them to change their minds, offering the name Derek which led to his middle name (and resulting in the initials D. D. T.)

Damien is the only child of Del and Raquel and nephew of Rodney Trotter. A recurring theme in the show was Rodney's fixated belief that Damien was literally the Antichrist despite the fact that Damien shows no resentment nor intentions of harm toward anybody except Rodney himself. Del and Raquel chide Rodney for his mad obsessions and believe Damien to be a perfect angel, spoiling him frequently.

In the episode "The Chance of a Lunchtime", Raquel reveals that she's pregnant with a baby, this being Damien.

Damien was born under a full moon and during the birth, Rodney even went as so far as to ask Del if the baby had been born with the numbers '666' branded on its forehead. When Damien was born Del held him in his arms and introduced him to his beloved mother. After Damien was born, Rodney refused to hold him or share a room with him. In some episodes when Damien was a child Rodney seemed more relaxed around him but his fear arose again when Damien became a handsome and popular teenager who delighted in tormenting Rodney.

According to his autobiography He Who Dares, following the events of Sleepless in Peckham, Del & Raquel spent a couple of weeks down on the Hampshire coast in Uncle Albert's caravan, leaving Damien behind to stay at Rodney's, much to his dislike due to the cramped living arrangments.

Some time later, Del & Raquel were called into Damien's school by the headmaster due to Damien flogging his own kebabs around his school in rise of Jamie Oliver's healthy meals becoming more prominant in schools. This meeting resulted in Damien receiving a 2 week suspension.

When Rodney & Cassandra had started a programme called "The Law of Attraction", they gave Del & Raquel a couple of DVDS to help them gain a better picture of the finer details of how it all worked. After getting Damien to research it on google, Del was blown away by the size of the programme. As a result, when when Rodney & Cassandra next invited them to join one of their "Positive Self-Visualisation" classes, he & Raquel jumped at the chance.

Damien was mentioned in The Green, Green Grass as being one of Tyler's friends that he hangs out with, meeting up with him on the Nelson Mandela estate, confirming that the Trotters were still living there as of 2005.

During the UK recession, Trotters Independent Traders got a bit of a shot in the arm as people started shopping around looking for quality goods at knock down prices. However, Damien managed to get his hands on a consignmnet of flat screen TVs form a Lithuanian contact who'd been earning a living as a clown at children's parties. These TVs were selling very well to the point that the Trotters couldn't keep up supply.

In March 2014, according to his autobiography He Who Dares, Beckham invited Del and his family to the do after, securing a bouncy castle for the birthday party of one of Beckham's children, which pleased Raquel & Cassandra. However, they nearly had an embarassing moment when Damien was caught behind the ghost train with one of the girls from little mix, but he made himself scare sharpish and nobody made a big deal out of it.

After this, during the summer of 2014 Del decided to join the Peckham Rye Golf Club with Damien, but he soon enough lost interest in it, instead livening it up by challeneging Damien to a buggy race (He Who Dares). Damien won, but only because a fox got in the way and forced Del to swerve into the chairman and his missus, leading to a lifetime ban form the golf club.

A week before completing his autobiography, Del was contacted by Ronnie Nelson to annouce that he too had retired, but that one of his old contacts had turned up with a load of touchscreen tablets which worked well until they overheat to hot temperatures. Despite this, Del was optimistic that he could combine these tablets with a load of vinyl gloves somewhere that if combined together would be a win-win scenario, showing that even in retirement he still had his traders mindset. Despite this, he didn't go through with it as he admitted to himself that it's over now and he's cream crackered; he'd passed the mantle on to Damien now and it was time to rest, remaining optimistic that his son could become a millionaire the next year.

From the earliest ages, Damien shows signs of being a spoiled brat, such as throwing things at Rodney, throwing seeds on the floor, deliberately waking Uncle Albert up from a nap, placing Cassandra's birth control pills inside an urn containing Albert's ashes, urinating in a public swimming pool (from the top of the diving board), encouraging his father to physically fight someone at a funeral, and even hoping that his father might get sent to prison merely to fit in with his group of friends with imprisoned fathers. Del and Raquel seem to remain oblivious to Damien's bad behaviour, and Rodney frequently calls him or refers to him as "Rat Boy". 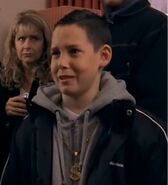