Only Fools and Horses Wiki
Register
Don't have an account?
Sign In
Advertisement
in: Characters, The Green Green Grass Characters

Elgin (David Ross) – Elgin Sparrowhawk is the farm manager of Winterdown Farm. He is a rather strange man, who likes to appear a bit thick to ensure his workload remains light, but likes to show people that he is capable of outsmarting Boycie any day. He always carries his briefcase with a string shoulder strap around with him, to help remind people that he is still farm manager, even though it looks empty on occasions.

Elgin is married to his unseen wife, who apparently has a glass eye. He has said on occasions that she doesn’t really like him, and at one point he started to have his mail redirected to Boycie's house just to ensure that she doesn’t find out that he's still living there. He has shown deep affection towards his wife on many occasions, although he obviously fancies Marlene. Whenever she has her back turned, he is copping an eyeful; on one occasion he went as far as to dive across to kitchen floor in an attempt to woo an unsuspecting Marlene.

The character of Elgin has many levels of personality. He has been known to display aspects of comfort, depression, empathy and even love on occasions, although this may sometimes be towards people who don’t love him back. Elgin has a sister who is mentioned only once in the first series. He has sometimes seemed idiotic, in the sense that he is ignorant of many walks of life; however, this is sporadically shown up as a facade. His subterfuge is irregularly revealed to other people, as he displays his ignorance to gain pay rises and substitute his work to other people.

Elgin is potentially the cleverest person displayed in The Green Green Grass, as his colleagues have not yet been revealed as masquerading their intelligence. Both Boycie and Marlene aren’t displayed as the cleverest people in the world. Even Tyler is displayed as a stereotypically thick teenager. Elgin's house has been shown once since the show's debut in 2005; it was shown from the outside in the episode "The Path of True Love". 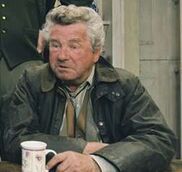