"Hole in One" was the 3rd episode of the 4th series of Only Fools And Horses, airing on the 7th March 1985 with a viewing figure of 13.4 million. This episode saw Uncle Albert "fall" down a cellar to try and win some money for the family.

Del sues the Brewery after Uncle Albert falls down The Nag's Head's cellar.

Four weeks have passed since Grandad's funeral and Uncle Albert first moved in with Del Boy and Rodney, and things are not good for them financially. It is the worst winter in over "two million years", and Rodney has foolishly made an investment in £500 worth of sun tan lotion.

At The Nag's Head, as the Trotters pass by the open door into its cellar, Mike wants a word with Del about the deep-fat fryer he sold him. Inside, Del and Rodney once again start to argue, prompting Albert to leave.

Suddenly, a loud crash is heard, and the Trotter Brothers run into the cellar to find that Albert had fallen down through the cellar's open door. Del hatches a plan when Albert says "I've got a right mind to sue the brewery!" He also tells Rodney to phone Solly Attwell, the Trotter Family's solicitor.

Back at Nelson Mandela House, Solly tells Del and Rodney that there's nothing physically wrong with Albert after his accidental fall, but suggests that it may have hurt him mentally. Furthermore, he tells them that the Brewery has agreed to settle out of court for two thousand pounds, an amount which will solve their financial troubles, but Del still decides to take the case to court, hoping to gain more compensation.

At the courthouse, Del and Rodney tell their sides of the story, hoping that they get their money from this, but when a wheelchair-using Albert comes up to tell his side of the story by faking amnesia a lot, the Brewery's Barrister reminds Albert about a lot of cases similar to this one, all involving Albert Gladstone Trotter, and they all took place after the war. Not only that, but Albert underwent basic parachute training on the Isle of Wight, where he learned how to fall off things without injuring himself.

Later, outside the courthouse, the Trotter Brothers are fuming. According to details from the trial, Albert, who has been nicknamed "the ferret" by the insurance company, has no less than fifteen prior cases against various institutions for falling down holes. As Del Boy points out, these are only the known cases, i.e. the ones that went to court and Albert has probably taken additional money in out of court settlements.

A squeaking sound announces the arrival of their Uncle, who is still in his wheelchair. Blowing smoke into the older man's face, Del demands the truth. Albert reluctantly admits that the court was telling the truth. He explains that the first time it happened was a genuine accident. Despite not hurting himself, because of his training, Albert never-the-less still got compensation from the incident. After that, whenever he and Grandad were short of money, Albert, who had recognised the opportunity presented to him, would deliberately go and fall down a hole. He apologetically says that he was just trying to help.

Unimpressed and unappeased, Rodney points out that Albert's actions very nearly landed them in serious trouble. Rodney was almost charged with contempt of court, whilst Del's name has been passed on to the Director of Public Prosecutions. As for the Trotters attorney, Mr Solly, he stands a chance of being debarred, though Rodney mispronounces it as de-frocked. What the brothers fail to take into account is that the only reason they were in court in the first place was due to Del's greediness. If they had just accepted the original £2000 compensation, all of this could have been avoided.

Genuinely remorseful, Albert explains that whilst he didn't want to do it, he had a couple of reasons to fall down the cellar at the Nag's Head. Firstly, he hoped to use the compensation money as a way to thank his nephews for all of the kindness that they've shown him these past few weeks. Tearfully, he says that the second reason was that he wanted to use a portion of that money to pay for Grandad's headstone. He tells his surprised nephews that when they were children, Grandad used to look after Albert, whilst lamenting how he never got the chance to repay his older brother.

Touched by this, Del and Rodney forgive Albert. They begin to wheel their Uncle home, shortly before Del furiously reminds Albert that he can walk and doesn't need the wheelchair. 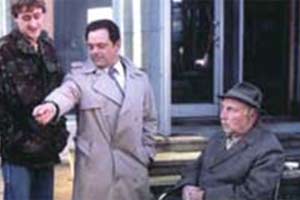