The Trotters lose their fortune, and Del goes on a game show to try and regain it. Meanwhile, Rodney and Cassandra try out "fantasty therapy".

In 1996, Del Boy and Rodney, the Trotter Brothers, finally realised their dream of becoming millionaires when they found a Harrison watch, auctioned it, and got £6,200,000.

Five years have passed since that incident...

The episode opens with Del and Rodney driving to see someone in an office block. They tell him all about what their lives were like before they became rich. The Trotter Brothers then talk about what happened on their most recent holiday with their partners Raquel and Cassandra, and Del's son Damien.

As the Trotters arrive at a fancy Carribean hotel and get all settled in, they get up to all sorts of mischief, such as Damien urinating from the high diving board into the swimming pool.

One night, as Del and Rodney go out for a drink, Rodney feels guilty about not taking Uncle Albert with them, but Del reminds him that Albert never had a passport, and that he's staying with Elsie Partridge. They then head off to the bar, while mocking Albert's catchphrase "During the war..."

It seemed that the Trotters were on top of the world, but one day, Del read a horrifying story in the newspaper that the Central American stock market had crashed, and to make matters worse, the Trotters invested all their money in that spot. They quickly escape without having to pay for their hotel bill.

It is revealed that the man the Trotter Brothers were talking to is a barrister. Once in a courtroom, the barrister asks if the two brothers have any witnesses. Del explains that Mike is now in jail for embezzlement (Sid has now taken over as landlord of The Nag's Head), and that he and Rodney lost their country estate and penthouse flat, which were seized by the Inland Revenue to pay off their debts. They do, however, still own their flat at Nelson Mandela House.

Adding to their woes, Albert died a few days afterwards, and the Trotters mistakenly attended the funeral of another Albert, who also happened to be a World War II veteran.

Back at the flat, Rodney reveals that he has been acquitted of any responsibility in the collapse of their company Trotters Independent Traders. Del, on the other hand, has been both declared bankrupt and convicted of tax evasion. While his sentence was suspended, if Del cannot pay off a £50,000 bill within the given deadline, the Inland Revenue will seize all of the Trotter family's remaining assets, including the flat, and Del himself will receive a two-year prison sentence. The situation appears bleak, but Del is confident about his chances of earning the required money, and announces that he will reform Trotters Independent Traders. Since Del has been banned from owning any companies, the new version will have to be managed by Rodney.

A few days later, Rodney and Cassandra discuss how best to celebrate Rodney's promotion, eventually deciding on dressing up for each other. The next day, Mickey Pearce phones Rodney by pretending to be an associate of The Sultan of Brunei. Later that night Del, Raquel, and Damien get ready to go out while Rodney listens to a Mozart record. Trigger arrives stating that Del promised him a lift to the pub despite the fact that he lives closer to the Nag's Head than the Trotters. A bit later, Cassandra - unaware that Del is still in the flat - enters the living room dressed as a policewoman followed by Rodney dressed as a Roman gladiator (supposed to be Russell Crowe, whom Cassandra fancies).

It turns out that Del is going to be a contestant on the gameshow Goldrush (as hosted by Jonathan Ross) and takes Damien and Raquel with him. Del's chances initially look glum after he gets the first question badly wrong, but fortunately the other two contestants prove to be even worse than he is, and Del manages to reach the "Rainbow Road", putting him in pole position for the prize money. Eventually, Del has to phone Rodney when he doesn't know the answer to a question. Rodney mistakes Jonathan Ross for Mickey Pearce until he looks at the TV and then tries to help Del with the final question, but unfortunately answers incorrectly.

Raquel and Damien return home via taxi because Del ran off after losing. After he eventually returns, Del gets a phone call from the producer, telling them that he actually got the final question right, and will be given his prize money after all. Unfortunately, Del thinks that it's Mickey Pearce winding him up and tells him to give all the prize money to charity. The episode ends with the Trotter family drinking champagne as Del triumphantly says, "We're the Trotters, and we're back!"

Dedications to Kenneth MacDonald and Buster Merryfield are shown after the ending credits. 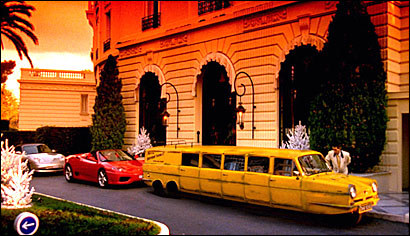 Retrieved from "https://onlyfoolsandhorses.fandom.com/wiki/If_They_Could_See_Us_Now?oldid=8356"
Community content is available under CC-BY-SA unless otherwise noted.