Start a Wiki
Jed (Peter Heppelthwaite) – Jed is the farm's ploughman. He again likes to think he's appearing a bit thick, but, in reality, viewers are led to believe that Jed is genetically thick. He is renowned for having a family of five children. He is often the brunt of a joke, whereby he and his wife are ‘too lazy’ to use contraception. In the episode "Here’s to You, Mrs Boyce", Jed's youngest child is seen on the front of a local newspaper.

Jed's workload has also been known to expand from ploughman to various other areas of expertise, such as in the episode "Home Brew" when he gets involved in Ye Potato Cyder business. He is also known for attempting to escape his wife, such as in the episode "The Path of True Love" when he turns up unexpectedly, in the middle of the night, at Bryan's caravan after having a blazing row with his wife. Bryan just accepts this as a usual occurrence and lets him in.

Other than the details already specified, little else is known about Jed other than the fact that he has a wife and many children. He is also renowned for wearing his hat almost all the time. He even turns up at the disco wearing his best suit and his grubby hat in "For Richer For Poorer". Other details include the fact that he is probably the thickest of the farm's staff and the most eccentric of the local people.

He is known for getting himself into several sticky situations such as the mistake regarding ‘letters’ in the episode "Your Cheating Art" whereby Boycie and Marlene ask him and Bryan to talk to Tyler about his ‘Dear John’ letter however they get the wrong end of the stick and end up telling Elgin that Marlene wants him leading to a risky situation for Elgin. 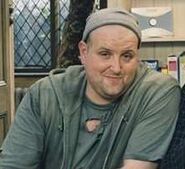 Add a photo to this gallery
Retrieved from "https://onlyfoolsandhorses.fandom.com/wiki/Jed?oldid=8471"
Community content is available under CC-BY-SA unless otherwise noted.