View source
watch 01:36
We're Getting Mutants in the MCU - The Loop
Do you like this video?
Play Sound

With Rodney getting married, and the Driscoll Brothers demanding their money, Del is left with a difficult decision to make.

With his marriage to Cassandra coming up, Rodney is worried that he'll never receive his diploma in computers, having apparently failed his exams again, and also has the problem of needing to find £2,000 for his and Cassandra's new flat. However, Del Boy takes care of these problems, as he announces that he's giving Rodney the £2,000 for a wedding present, and then hands over Rodney's diploma, telling him that his teacher had been delayed marking some of the diplomas. When Rodney leaves though, Del confides to Uncle Albert that Rodney had in fact completely failed his exam, and his teacher required a £150 bribe in order to give a passing grade, and what's more, Del will either need to sell his stock of mobile phones or get Boycie to pay up for the dodgy VCR's Del sold him a few months ago (in "Danger UXD") to raise the £2,000.

The following night, Del finds it hard work selling his phones, and Boycie claims to be out of pocket, thanks to a slump in the used car market and the medical bills for Marlene's pregnancy. Things get a whole lot worse when Mickey Pearce and Jevon enter The Nag's Head with cuts, bruises, and broken bones all over their bodies and tell Del that Tony and Danny, the Driscoll Brothers, are coming for him, and that it was in fact the Driscolls who supplied Del's phones.

Del, Mickey, and Jevon hide upstairs (Trigger does as well, though he doesn't understand what's going on), and the Driscolls enter, but find nothing. Just when it looks like they're safe. Trigger accidentally activates the antenna in Del's cordless phone, causing it to extend right up his nose, giving away their hiding place. The Driscolls threaten Del into paying them £2000, but Del manages to buy some time by reminding them that he had looked after their mother when they got themselves jailed for their early crimes. Having seen the Driscolls enter, a terrified Boycie enquires whether Del had bought the VCR's off them and Del, seeing a chance to get his payment, says he did. The "skint" Boycie then suddenly produces £3,000 from his jacket pocket, giving Del the money he needs.

On Rodney's stag night, the Driscoll Brothers show up again looking for Del, who suddenly remembers that he had promised Rodney £2,000 for his flat. He goes off to talk to the Driscoll Brothers and leaves Rodney alone with Denzil, who believes that Del is using the £2,000 to pay off the Driscolls. Rodney returns to the flat late that night (with an 'L' plate glued to his boxer shorts), shouting at Del, who is in the bathroom. Del informs Rodney that his money is on the table. Del is then shown nursing his injuries, muffling his pained groans, having taken a beating from the Driscoll Brothers rather than break his promise to his younger brother.

On the day of Rodney and Cassandra's wedding, Del is able to attend as the Best Man, and Rodney is embarrassed as the minister reveals his middle name to be Charlton (named after Charlton Athletic according to Del, as their mother was a fan). Cassandra's parents Alan and Pamela also attend, although Pam thinks that Alan will get drunk at the reception.

At the reception at The Nag's Head, Rodney thanks Del for everything, and leaves with Cassandra on their honeymoon. Marlene approaches Del and the two talk about the past years, with Marlene asking Del why he never got married despite always being engaged when he was younger. Del tells Marlene back then none of the women he went out with were interested in helping to raise Rodney, and Del wasn't willing to put his younger brother into foster care. As a result, he broke up with them because family came first. Del and Marlene say a fond farewell (which is a little too fond for Boycie's liking), and Del is left alone to think back to all the good and bad times he's experienced, as well as Rodney's new found happiness, while "Holding Back the Years" by Simply Red is appropriately playing in the background.

A few weeks later, Del returns home to the flat from the market, followed shortly by Rodney, dressed in a nice three-piece suit. Rodney asks Del what is for dinner, then Del offers Rodney some advice: "You don't live here no more." Rodney suddenly realises that, and exits the flat abruptly, leaving Del amused, as he now knows that Rodney will always be around. 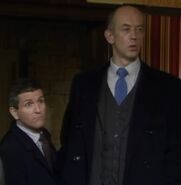 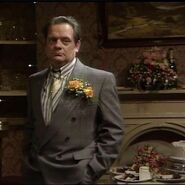 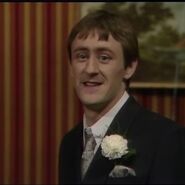