1957) is a fictional character from the BBC television sit-com Only Fools and Horses, in which she was Del Boy's longtime girlfriend. She was portrayed by Tessa Peake-Jones.

With Only Fools and Horses moving into its sixth series, writer John Sullivan wanted Del Boy to start looking for more mature women, rather than continually chasing 20-year-olds, and to have a long-term relationship, so he came up with the character Raquel for the 1988 Christmas special episode, "Dates".

During the episode, she was introduced to Del via a dating agency and at first the two got on well. She told Del that she was a trained actress, with ambitions to have a full-time career in the profession, although her only experiences of the business thus far had been an unsuccessful pop duo with a friend, "Double Cream", various low-key stage appearances and a one-line part in a Doctor Who episode (which may sound somewhat impressive in the modern day, but the show had a very poor reputation in 1988, and would be cancelled the following year). She also mentioned that, owing to her career choice, she had long been estranged from her parents.

However, she declined to mention to Del that she supplemented her income with a part-time job as a stripagram, a fact he only discovered when he unwittingly booked her for Uncle Albert's birthday party at the Nag's Head pub. Humiliated in front of all his friends, Del told her he didn't care to see her anymore. Despite soon changing his mind, an unfortunate arrest prevented him from meeting up with her and she left London to work in the Middle East and later the United States.

It was initially intended for that to be Raquel's only appearance in the show, but a year later Sullivan wrote her into the series again, for the 1989 Christmas special, "The Jolly Boys' Outing". During the episode, Del and a group of friends were on their annual day trip to Margate and, by chance, were stranded there for the night when their coach blew up. They went to a night club in Margate that night, where Raquel was working as one part of a magician's double act. She and Del spoke again, and this time agreed to stay in touch. Shortly afterwards, Raquel moved back to Peckham with Del and, from series seven onwards, she became a permanent character.

Thereafter, Raquel tried on several occasions to resurrect her showbusiness career, such as auditioning for Shakespeare plays (she won a role in a production, only to turn it down after discovering that she was pregnant) and appearing on stage alongside the singing dustman with a speech impediment, Tony Angelino, in "Stage Fright". Following the birth of her and Del's son, Damien, she became a housewife, taking over the cooking and cleaning roles from Uncle Albert. In a plot twist in "The Class of '62", it was revealed that she had been married to DCI Roy Slater, corrupt police officer and nemesis of Del, for four years. Raquel was reunited with her parents in "Time On Our Hands", when she invited them to dinner at the flat.

A kind-hearted and motherly figure, in Del she met a man with a similar nature - well intentioned but ultimately with ambitions beyond his talent. Their relationship suffered several problems, and she briefly left Del in "Fatal Extraction" due to his gambling and heavy drinking, but they were ultimately reconciled, though never married, despite hints of Del's desire to marry her. Some fan fiction writers have tried to get Raquel and Del to tie the knot. Her character also changed as the show went on, moving from an ambitious woman lacking in confidence, to a tougher sarcastic one unafraid to stand up to Del's scheming and fast-talking nature.

According to his autobiography He Who Dares, following the events of Sleepless in Peckham, Del put away a large chunk of his money for a rainy day, ploughing the rest into a chipment of Hungarian-made satnavs from Monkey Harris, whihc sold like a charm, though later discovered that they spoke every language but english.

It was around this time that she & Del spent a couple of weeks down on the Hampshire coast in Uncle Albert's caravan, leaving Damien behind to stay at Rodney's. Due to Albert having a timeshare deal with Elsie's son & wife, they were constantly trying to convince Del to sell it and split the profits, but he always refused as as Del considered it his last connection to Albert. Plus it came in handy when things got on top and he had to keep his head low.

Some time later, Del & Raquel were called into Damien's school by the headmaster due to Damien flogging his own kebabas aroudn the school in rise of Jamie Oliver's healthy meals becoming more prominant in schools. This meeting resulted in Damien receiving a 2 week suspension.

By 2015, Del & raquel were still togetehr and she was doing well overall, taking part in amateur dramatics. 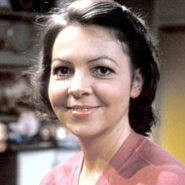 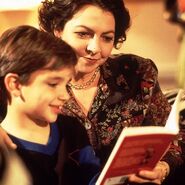 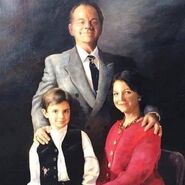 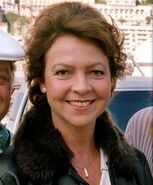