"The Frog and the Pussycat"

Irene "Reenie" Turpin was Trigger's aunt and Joan Trotter's best friend. She made her first (and only in the main series) appearance in the Only Fools and Horses Christmas special "The Frog's Legacy". She later returned as a main character in the prequel series Rock & Chips.

Irene "Reenie" Turpin Turpin was born in 1927. She was 18 when the war ended and was a bit of a flirt during it. According to Uncle Albert, she was "a right little raver in her younger days" and had "more Yanks than Eisenhower". The year the war ended was when her dippy nephew Colin Ball, later to be known as Trigger, was born. Reenie became best friends with Joan Mavis Trotter and served as an aunt-like figure to her oldest son Derek "Del Boy" Trotter. Reenie was the only person Joan ever told about Freddie Robdal being the true father of her youngest song Rodney. After Joan passed away, Reenie entered a relationship with Clayton Cooper and left Peckham.

Reenie worked alongside her best friend Joan, as an usherette at the Ritz Cinema. Like Joan and her oldest son Del, Reenie loathed Joannie's husband Reg and was unafraid to stand up to him, threatening to reveal that Reg was often violent toward his wife.

In July 1961, Joan would tell Reenie about her affair with Freddie. She helped Joan determine her pregnancy in an anonymous clinic following the affair. She later submitted her name for Joan to use while visiting Freddie in prison in "The Frog and the Pussycat".

In early 1964, when Reenie went to see Joan in the hospice, Joan lamented to her that if only she knew where Freddie had hidden the gold before his death, her boys would be set for life. Not wanting Rodney to find out the truth of Freddie, Joan told Reenie to burn any photos of her and Freddie in it after she is gone so that as Rodney got older, he would not see them and notice the similarities, and realise that Robdal was his real father. Reenie left two closeups of Joan for Rodney, which was just her in the photos.

When Joan died on the 12th March 1964, She was buried a few days later in Peckham Cemetery and Reenie came to the Trotters flat; taking out any photos of Joan and Freddie in them and burnt them. This would protect Rodney from knowing his true paternity.

After Joan's death, Reenie would take turns with Grandad Trotter and Violet Trotter in babysitting Rodney. One time, Reenie took him to Woolworths, and Rodney was taking things from the counter and Reenie did not know. When she found weights, scent, and a Helen Shapiro record. Se took him up Selfridges the next day.

In 1965, feeling she was lost without her best friend Joan, Reenie felt there was nothing left for her in Peckham so moved away from London altogether to the south coast in Portsmouth, Hampshire where she still had relatives living there.

Reenie was first mentioned in "Chain Gang", after Trigger pawned her necklace without her knowledge to raise the money to buy into the gold chains consortium.

In 1987, a 60 year old Reenie Turpin attended the wedding in Hampshire of her great niece Lisa to Andy. While there, some of Reenie's late friend Joan's relatives came down for the wedding, including Joan's sons Del and Rodney and their uncle Albert Trotter. Del had once dated Lisa's mum and Lisa had invited the Trotters to the wedding. Del had known Reenie when he was a teenager.

Del met Reenie again at the wedding and they hugged as they had not seen each other for 22 years. Reenie also met Rodney again. Rodney tried to hide his boredom at fiesty and vivacious Reenie. Reenie whispered to Albert that Rodney looks so much like Freddie Robdal. She had a dance with Albert then sat down and got chatting to Del Boy. She said that his late mum Joan had been left some gold bullion in her will. Reenie said she visited Joan at the hospital when she died in 1964 and Joan had said if only she knew where Freddie had hidden the gold, her boys would be set for life. Reenie said that Freddie had robbed a bank in August 1963 in London City with some mates. While the rest of the gang was caught, Freddie and the gold got away. Reenie said no one knew where Freddie had hidden the gold. Del said he could be a millionaire as gold worth £250'000 in 1963 would be worth £1million or more in 1987.

Later on Rodney thought Reenie was lying but it was all true as Del had seen The Driscoll Brothers who confirmed the story. Del did some major enquiries and the vicar who married Andy and Lisa said the gold was buried at sea. Seemingly the Trotters abandoned the search as the gold was buried in 500 square miles of sea, the North Sea.

In 2003, Del mentioned Reenie and her involvement in hiding Rodney's true paternity from him but Rodney had just found out as Sid had lent Rodney a photo from 1960 which had Freddie in it. Rodney had had the pic enlarged and noticed the striking resemblance to himself and Freddie.

Del mentions in his 2015 autobiography He Who Dares that Reenie passed away sometime before the release of his book. 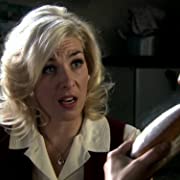 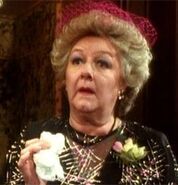