Only Fools and Horses Wiki
Register
Don't have an account?
Sign In
Advertisement
in: Episodes, Rock & Chips Episodes

Five Gold Rings
Rock & Chips is a British television comedy drama and a prequel to the situation comedy Only Fools and Horses. Set in 1960s Peckham, it focuses on the lives of local villain Freddie Robdal, Joan and Reg Trotter and their teenage son Derek. Nicholas Lyndhurst, who played Rodney in Only Fools and Horses, plays Robdal alongside Kellie Bright, Shaun Dingwall, Phil Daniels and James Buckley. The Shazam Productions and BBC co-production was written by Only Fools and Horses creator John Sullivan, directed by Dewi Humphreys and produced by Gareth Gwenlan.

The 90 minute production was originally conceived in 1997 and commissioned in 2003, with the premise established in the final episode of Only Fools and Horses in 2003. However, it was shelved and Only Fools and Horses spin-off The Green Green Grass was developed; its success led to the prequel being recommissioned in July 2009. Filming began in October in London and the production was first aired on BBC One and BBC HD on 24 January 2010. It was the second most watched programme of the day and gained mixed reviews from critics.

Set in 1960, Joan Trotter is in an unhappy marriage with the work-shy Reg, with whom she has a teenage son, Derek ("Del Boy"). However, the reappearance in Peckham of bank robber, "art connoisseur" and womaniser Freddie Robdal, recently released after a ten-year prison sentence, will bring about changes in Joan's life. Rock & Chips centres on the relationships between the glamorous Joan Trotter, Del's useless father Reg, the safe-cracker Freddie Robdal and the young Del Boy. It also features teenage incarnations of some of the original show's regular characters, including Boycie, Trigger, Denzil, and Jumbo Mills. The Trotter family have not yet moved into their flat in Walter Raleigh House (later Nelson Mandela House), but there are some recognisable settings such as the mean streets of Peckham and the Nag's Head circa 1960.

The story starts in February 1960 and begins by setting up the characters. Joan Trotter (played by Kellie Bright) is in an unhappy marriage with the work-shy Reg (Shaun Dingwall), whose father Ted (Phil Daniels) has just moved in. Her teenage son Derek, often shortened to "Del Boy", (James Buckley) and his friends Boycie, Trigger, Jumbo Mills and new-in-town Denzil (Stephen Lloyd, Lewis Osborne, Lee Long and Ashley Gerlach) are still in school following an increase in the school leaving age. She works at the local cinema with 's aunt Reenie Turpin (Emma Cooke) and Raymond (Billy Seymour) for cinema manager Ernie Raynor (Robert Daws), and at the Town Hall as "a part-time filing clerk who sometimes makes the tea". Convicted thief Freddie Robdal (Nicholas Lyndhurst) has just been released from Dartmoor Prison and has returned to Peckham with explosives expert Gerald "Jelly" Kelly.

At the Town Hall, Joan asks Mr. Johnson (Colin Prockter) about applying for a flat in the new high-rise estate; she is told she is unlikely to get a tenancy as preference will be given to those with young children. At the Nag's Head, Freddie and Reg meet, and Reg invites him to his house to continue drinking. After meeting Joan and buying her a drink, Freddie realises she is a Trotter, a family he has a dislike for. After they return to the Trotter's house, Freddie shows his affection for Joan.

At the cinema, Joan is promoted to part-time assistant manager and Rayner tells her that the safe sometimes contains over £2000 at weekends. She later tells Freddie this fact after he goes round to her house to offer Reg some work (Reg was not at home as Freddie told him to meet him at the pub). They talk about art, and he invites her (and Reg) to his house-warming party.

In March, Joan has a Marilyn Monroe hairstyle and the safe at the cinema is broken in to. Ahead of the party, Freddie gives Reg the use of his car to return unused decorating materials to Guildford and he takes his father, Reenie and her boyfriend Clayton (Roger Griffiths) with him. They run out of petrol on the way, leaving Freddie and Joan the only ones at the party. They dance, and Freddie admits that he wanted to be alone with Joan so they could talk about art. They end the night sleeping together.

In June, Reenie accompanies Joan to a pregnancy testing clinic, while the boys are on the Jolly Boys Outing to Margate (providing Freddie and Jelly the opportunity to rob a jewellers). On their journey home, Reenie tells Joan about Freddie's time in prison and she realises he robbed the cinema. After Freddie tells Kelly he thinks he's in love with Joan, Reg announces her pregnancy in the pub. While Joan is completing a housing request form, Freddie goes to see her and she fails to acknowledge the baby is his.

The Trotters' housing application is successful in August, September sees them view a flat in the new Sir Walter

Raleigh House, which they have moved into in October. In November, Joan has her baby, which she calls Rodney (after the "handsome actor" Rod Taylor) to the surprise of everyone else. The closing scene sees Joan enter the balcony of her flat with Rodney in her arms. After telling him that Del will be very rich one day, Joan sees Freddie on a balcony in a tower opposite; she shows him Rodney and nods her head that he's the father, to his delight.

Throughout, the story tells of Del's dislike for his father and his affection for his mother, Reg's affair with the barmaid at The Nag's Head, Del and Jumbo selling goods from the docks out of the back of a van, Del and Boycie's attempt at dating Pam and Glenda (Jodie Mooney and Katie Griffiths), and provides an introduction to Roy Slater (Calum MacNab) and Albie Littlewood (Jonathan Readwin).

Writer John Sullivan had the idea for a prequel to the sitcom Only Fools and Horses in 1997; its commission was announced in 2003[1] and the premise for the series was established in the final Only Fools and Horses episode "Sleepless in Peckham" in 2003, where Rodney discovers a photograph of Freddie Robdal from 1960. His uncanny resemblance to Rodney confirmed that he, and not Reg, was Rodney's biological father. A lot of the groundwork for this had been both laid and explored in the Episode "The Frog's Legacy" the 1987 Christmas Day hour-long special. In the episode Rodney goes to ask about his father to which Albert diplomatically replies 'They're rumours Rodney. That's all. Rumours.' The proposed prequel, was to be titled Once Upon a Time in Peckham, it would see young versions of Del, Boycie, Denzil and Trigger, and Sullivan said "Joanie will be a key character, and during the film will give birth to Rodney." However, the prequel was shelved, and spin-off The Green Green Grass was developed to follow secondary characters, Boycie, Marlene and their son Tyler, as they escape the London Mafia and attempt to live in the Shropshire countryside. It was reported in January 2009 that the prequel was being considered again, following the success of The Green Green Grass.

On 3 July 2009, the BBC announced that the prequel had been commissioned as a 90-minute comedy drama, titled Sex, Drugs & Rock 'n' Chips, to be co-produced by the BBC and Sullivan's production company, Shazam Productions.[2][3] Originally scheduled for August, filming began in October 2009 in London,[4] lasting 19 days.[5] Nicholas Lyndhurst, who played Rodney in Only Fools and Horses, would play villain and art connoisseur Freddie Robdal in a reprise of his role in the "Sleepless in Peckham" photograph, Kellie Bright (Bad Girls, The Archers) would play the "glamorous" Joan Trotter, her husband Reg would be portrayed by Shaun Dingwall (Soldier Soldier, Doctor Who), and his father by Phil Daniels (Quadrophenia, EastEnders). James Buckley (The Inbetweeners), would play the teenage Derek, Joan and Reg's son, portrayed by David Jason in Only Fools and Horses. Dewi Humphreys (The Green Green Grass) would direct. It was announced in January 2010 that the production would be shown on 24 January on BBC One with the title Rock & Chips.

The drama was produced by Gareth Gwenlan, who worked on Only Fools and Horses between 1988 and 2003. Speaking to the Western Mail, he described it as "essentially a love story" between Joan and Freddie, and he said that Lyndhurst "told me he thinks it's the best thing he's ever done". Speaking about the casting of Lyndhurst, he said he "would make a marvellous villain, which is something people will never have seen him do on TV before".

Speaking about continuing the story, Gwenlan said that the production was "run on the idea it'll be turned into a series. This one lays the groundwork and John [Sullivan] has enough for about two more series."

On 13 September 2010, while promoting the third series of The Inbetweeners on BBC Radio 5 Live, James Buckley confirmed that Rock & Chips would return for two more specials, one for Christmas 2010, and the other for Easter 2011.John Sullivan died on 23 April 2011, five days before the final episode was broadcast. 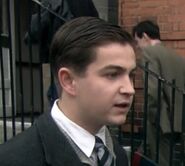 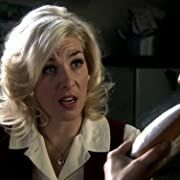 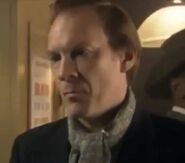 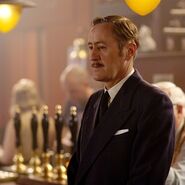