Despite only ever making five on-screen appearances, much of Roy Slater's background is revealed in some detail by conversations between other characters and reminiscences of Slater himself.

As a child, Slater longed to be part of Del Boy's gang at school as they used to sit next to each other in class, but he was always an outsider, widely reviled amongst his peers, and renowned for his slyness. For example, after a gang of lads pinned Slater down, Trigger tried to pour itching powder into his belly button, only to be stopped by Del. However, despite Del having rescued him, Slater later repaid the favour by telling the headmaster that Del was kissing Slater's sister behind the bicycle sheds. The others generally showed their contempt of Slater during their games, as when they played Pirates, Slater was always the one who walked the plank. He actually longed to play Bluebeard but was so widely disliked that the others didn't let him. They eventually did let him be Bluebeard, however that was "on the day Bluebeard walked the plank".

Slater's first chronological appearance was in the first episode of Rock & Chips, a prequel trilogy to Only Fools and Horses. The teenage Slater is a prefect at his and the gang's school, the Martin Luther King Comprehensive School, where he does his best to try and keep Del and the others in line so as to avoid trouble, leading to a strain on his friendship with them. Despite this, they invite Slater on the 1960 Jolly Boys' Outing, and on the way, Slater catches Jumbo Mills and Albie Littlewood taking drugs, but they convince him that they are breath fresheners. Slater subsequently takes one (for help in attracting girls), and dances wildly on the dance floor until he passes out. Del and the others initially leave him behind at the halfway house, but later pick him up on the way back.

In the second episode, "Five Gold Rings", Slater shows up at the market to tell Del and his friends that he just became a police cadet after leaving school. Slater arrests Del and Jumbo for selling illegal American records, although he is snubbed by Sgt. Foster, who then goes on to keep the records for himself and let Del and Jumbo go with a warning.

Once he worked his way to the top and became a Detective Inspector, Slater's enjoyment of the power of being a police officer was so embedded he even arrested his own father Harry for having a faulty light on his bicycle while going to the fish shop, Harry having borrowed the bike from Slater himself. Slater claimed he had no choice, but Del, knowing Slater told him he'd never regretted making an arrest in his life. This resulted in Slater's father naturally despising him. Along the way, Slater married an actress named Raquel Turner, although they would be seperated by the 1980's due to him not supporting her in show business.

In his third chronological appearance was in the third series (1983) episode of Only Fools and Horses, "May The Force Be With You", DI Slater (who is investigating the robbery of a microwave oven from the market) tricks Del's younger brother Rodney into taking him back to the family flat at Nelson Mandela House by pretending to be one of Del's best school friends. Del is naturally horrified to see him, as were Trigger and Boycie earlier in the episode, and makes it perfectly clear that Slater is anything but an old friend.

Del also reveals to Rodney that Slater, in his career as a policeman, became a corrupt and malevolent man and would do anything to get an arrest (as per the story of his father above). This is bourne out when Slater threatens Del that, unless he reveals the identity of the microwave thief, Slater will send Del to prison for the theft and plant drugs on Rodney (thereby breaking the conditions of his suspended sentence) and have him locked up also. The implication of this is that Grandad would be at the mercy of attacks from the violent thugs on the estate, which Slater would in all probability organise (Del told Rodney that Slater is well-known in both the police and criminal communities for having a vast network of abused informants, all of whom are threatened to work with Slater in case he reveals their betrayal to the criminal underworld and have them killed).

In order to reveal the identity of the "phantom of the market", Del negotiates with Slater an immunity from prosecution if he grasses the thief up, which Slater agrees to as has signed by his Superintendent. Having counter-signed the immunity, Del is asked one final time by Slater who had stolen the microwave, to which Del replies "I did." grinning and pointing to the signed immunity form.

In the 1985 Christmas special "To Hull and Back, Slater was investigating the smuggling of diamonds from Holland to Britain. Boycie and his associate, Abdul Khan, put money forward for a diamond exchange; Slater, now a Detective Chief Inspector, is investigating the case and knows who is supplying the diamonds as well as who is putting the money up, however does not know who the courier is. Slater corners Del and explains the case to him, stating that he has on several occasions he has managed to corner the suspects but was never able to find any diamonds on them, thus then being forced to release them. Slater tells Del that he is desparate to solve this final case and end on a high note as Slater is retiring from the police force, despite being begged by the Commissioner to stay (in reality he was being forced out as he had tried to pin a charge of being a voyeur on a registered blind person). Slater then coerces Del to keep his ear to the ground so he can tell Slater if he hears anything, not realising that the courier is in fact Del himself.

Having cornered Del and the others following the successful exchange of the diamonds, Slater is then revealed to be the actual intended recipient of the stones and pockets them - thus explaining why he claimed never to have been able to find diamonds on the suspects during previous raids, so thus worked in cahoots with a Dutch diamond dealer named Hendrik Van Kleefe. He is then driven home by his associate, Terry Hoskins, whom he tells how he would have liked to have cracked the case before he left the force, however Hoskins turns the car into a road where a police blockade is waiting to search Slater, having suspected that Slater was the culprit for many months and only now he has the stones on him can they prove his guilt. Slater is subsequently sent to prison for five years.

While Slater was serving his prison sentence, his father Harry died. However, because Harry hated Slater more than anyone else, Slater's mother Ruby wrote to the prison governor asking him to ban Roy from Harry's funeral.

Slater's final appearance was in the seventh series (1991) episode "The Class of '62", where upon his release from prison, Slater returns to Peckham claiming he wished to turn over a new leaf after the death of his father. Slater arranges a reunion whereby he manages to convince the others of his good intentions and that he is actually not as bad as he used to be. It actually transpired that (unknown to Del) Slater was Raquel's loathed missing husband and he wanted her to sign a contract giving away her rights to his upcoming "inheritance".

Del (due to his knowledge of Harry's loathing of his son) realises that Slater's inheritance cannot possibly be from his father, and discovers a letter from a Bond Street diamond merchant asking Slater what he wants to do with the stones that he left with the merchant some years before. Del and Rodney then confront Slater, telling him they have copies of the letter and that since he had not been imprisoned for the theft of these diamonds, the double jeopardy clause would not apply and he would be sent to prison again. The Trotter Brothers make Slater agree to grant Raquel a divorce and never return to Peckham. 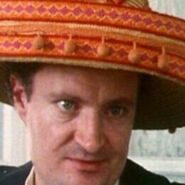