"Time on Our Hands" was the third and final part of the 1996 Christmas trilogy of Only Fools And Horses, airing on the 27th December 1996 with a viewing figure of 24.3 million, and was meant to be the last ever episode of the show. The Trotters became millionaires in this episode and after years of working on markets selling dodgy gear in all kinds of weather they could enjoy a millionaire lifestyle, for at least the next 5 years at least. A the time of broadcast, this was meant to be, very likely, the last ever episode but the show was to return 5 years later due to popular demand. Time On Our Hands was watched by a staggering 24.1 million viewers.

Raquel's parents come to Peckham for a family dinner, which leads to some surprising for the Trotters. Could it really be that by this time next week they're millionaires?

The episode opens with a nervous Raquel planning the visit of her parents, James and Audrey, for dinner at the flat, and worrying about them meeting Del Boy for the first time. Del and Uncle Albert reassure her that they will help out. Del is still worried about Rodney after he and Cassandra had suffered a miscarriage two weeks previously, and Albert suggests that they come up with a "counter-worry" to take his mind off it, which leads to Del pretending to be ill, though Rodney barely notices.

Later that day, Del and Rodney are in the lift when it breaks down. After being trapped in there for some time, the Trotter Brothers have a discussion about Rodney and Cassandra's miscarriage. Rodney admits that he's spent too much time feeling sorry for himself since Cassandra lost their baby. Del tells Rodney that it's just a dropped stitch in life's tapestry, which their late mother Joan used to say whenever things went wrong. Rodney agrees and is finally at peace with the whole thing, and Del suggests to Rodney to go home and have a heart-to-heart with Cassandra. Once the conversation is over, Del successfully fixes the lift himself, and gets it working again. Only then does Rodney realise that Del had in fact tampered with the controls, in order to force Rodney to talk. The Trotter Brothers share a hearty laugh.

That evening, James and Audrey Turner, Raquel's parents, arrive for the meal, and all appears to be going well. However, whilst moving the coffee that Albert has prepared in the kitchen, Del realises that it is actually gravy, and thus Albert's "gravy" that they are pouring on their dinners is in fact coffee. The dinner is ruined, when all around the table politely mention that they are full up. When picking up his car from the Trotters' garage the following day, James — an antiques dealer — spots an old watch engraved "Harrison" on a gas stove. After closer examination, he suggests that it may be the work of John Harrison, the man who designed and built the world's first successful maritime clock in the 18th century.

The watch is examined by experts, and all accept it to be the Harrison "lesser watch", a semi-mythical piece whose designs exist but it is unclear whether the watch was ever made. It goes to auction at Sotheby's and after hearing the opening bid of £150,000, Del promptly faints. When Del recovers, he and Rodney rush back into the auction room, with the bidding still going on. The latest bid is revealed to be £3,500,000 (which Del thinks is £350,000) only when the next bid comes in at £4,000,000 with the auctioneer stating 'The Bid now stands at four million pounds' Rodney faints. It emerges that the final bid was at £6,200,000. When Rodney re-reads the Sotheby's statement in the Trotter Van, the Trotter Brothers begin whooping hysterically, rocking the van with their overjoyed lunacy.

Del and Rodney visit Boycie's car showroom and, unaware of their new fortune, he teases them about having their photograph taken next to one of his Rolls Royces. Rodney, wanting to pay his older brother back for helping throughout his life (including getting over Cassandra's miscarriage), buys the car for Del, much to Boycie's horror. The Trotters then visit The Nag's Head and receive a round of applause and standing ovation from the regulars.

The final scenes, done to "Our House" sung by Crosby, Stills, Nash, & Young, show the Trotters enjoying their new wealth. Del and Raquel move into a mansion while Rodney and Cassandra buy a luxury riverside apartment and they buy Albert a boat, which he promptly crashes into a bridge on the Thames.

Del returns to their now empty flat in Nelson Mandela House, and recalls the memories from the flat over the years, including quotes from their parents, and Grandad. Rodney also returns, and Del reveals that he is already beginning to miss the old life as a market trader. Albert returns to the flat to get some of his belongings as well to have one last look, and the three leave, though not before Del has answered a call from Lenny Morris offering them 250 carpet steamers. Del is initially keen, but a serious Rodney tells his older brother that they aren't in the business any more. Del reluctantly tells Lenny that "Trotters Independent Traders has ceased trading."

In the last scene, Del, Rodney, and Albert walk off into an animated sunrise, with Del arguing that they should

invest their new money in the futures market (making one last claim that this was one of the many things his mother Joan said on her deathbed), with the closing refrain: "This time next year, we could be billionaires!"

And so, things have really come up roses for the Trotters, at least until five years later... 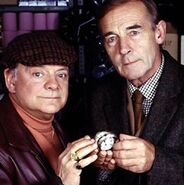 Add a photo to this gallery
Retrieved from "https://onlyfoolsandhorses.fandom.com/wiki/Time_On_Our_Hands?oldid=8550"
Community content is available under CC-BY-SA unless otherwise noted.